Migration: time to move on? 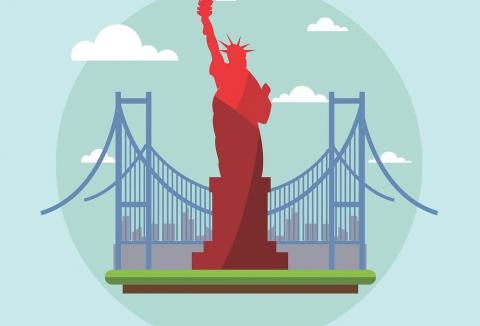 Kabul has fallen. As dark night follows day, civilians begin their migration, a journey which will either see them transformed into ‘refugees’, worthy of help, or ‘asylum seekers’, tabloid villains.

Will the West live up to its own standards, in welcoming those displaced?

Inscribed at the base of the Statue of Liberty is the famous line:

“Give me your tired, your poor, Your huddled masses yearning to breathe free, The wretched refuse of your teeming shore.”

Whether or not these are just empty words, the tragedy in Afghanistan will be the source of headlines for years.

Headlines tend to focus on this type of migration, but there is a broader point that might go unnoticed: which is that migration goes both ways.

From the great Gothic migrations accompanying the fall of Rome, to the exodus from Syria, war and displacement have caused people to up sticks. The chance of a better life and religious freedom have motivated people to move for thousands of years too.

Now mix in climate change and competition for scarce resources, we should expect more migration not less.

To the year ending March 2020, UK net migration increased 313,000. The two main reasons for this appear to be formal study (36%) and work (32%). The pandemic has since caused chaos with migration statistics, but there is little reason to think migration won’t continue to increase.

Migration slipping through the net

The crucial word in the phrase “net migration” is not “migration”.

European countries were long a source of emigration, exporting their criminals or persecuted to a safe distance and restless young men to colonise the world.

And now there is a new movement under way of an altogether different kind: that of the digital nomads.

Individuals in the UK who are wealthier tend to migrate to countries such as the US. Just ask James Corden. The super-rich often migrate for tax reasons.

Then there are digital nomads, often well off by international standards but work hard (and remotely) for a living. They are looking for a better life abroad, in search of better weather, cheaper accommodation and (depending on tastes) better food.

Rather than fleeing famine and disease, digital nomads are in part fleeing another sort of malaise affecting rich countries – a sense that somehow the earn-more-to-buy-more treadmill is not only not worth it, but actively harmful, to the environment and their own well-being.

Digital nomadism is in part a reaction to consumer culture, poor diet, a mental health crisis and urbanism that disrespects the environment.

Boots on the other foot

The politics of migration bring about concerns of religious and cultural clashes, as well as overcrowding. But in the grand scheme of things, it has proven to be mutually beneficial.

What about problems caused by digital nomads in the – often poorer – countries they migrate to?

There is not a huge amount of evidence.

Anecdotally, many do not work within the law, inappropriately using or overstaying tourist visas. Many manage to avoid paying taxes anywhere, not contributing to the local infrastructure on which they depend.

Digital nomad visas are set up to encourage this relatively well-off group to move, with a promise of lower local taxation in the hope that they will spend on local goods and services, boosting the local economy. One result is inflation – just look at house prices in Lisbon – and cross-border gentrification.

Migration offers a host of benefits to countries rich and poor alike, whether migrants are refugees with nothing in their pockets or digital nomads with their laptops.

But to ensure its benefits are not lost in the fog of angry headlines, it is incumbent on migrants to obey local law and custom as much as it is for host countries to be welcoming.

This responsibility is all the greater for digital nomads – generally educated and relatively well off.

But with the focus always on the problems of immigration, rather than the benefits of emigration, migrants been chronically underserved.

It is often very difficult to obey labyrinthine laws.

Adviserly is exclusively in touch with the most professional and tech-savvy firms to ensure that both clients and businesses are aware of their rights and responsibilities.

Every digital nomad is an ambassador for their home country but also migration in general; abide by local laws and customs, and they create a positive framework, an international culture, for the benefit of those migrants who have no choice.

It’s a diverse group, but in their experience of different cultures, migrants have a lot in common. To some extent, all are “yearning to breathe free”.