“Tu es un avocat?” she said repeating what I had said, a glint in her eye. Another student, sitting on my other side, sniggered, delighted that they had understood, where I had failed.

“I thought it was the word for lawyer?”

And it is, as well as the word for avocado. I suppose it’s like when people deliberately (and hilariously) mix up ‘barrister’ and ‘barista’.

In between lessons at the Alliance Française in Lyon, I was setting up a (small) regulatory consultancy business in the UK. Being a lawyer, I wanted to make sure everything was in order… but oh my.

And that was when I first had the problem that Adviserly seeks to solve.

Because I could not find someone to advise me on both French and UK tax and the balance between them. The sums involved were, colloquially, piddling.

Tax lawyers in the UK were likely to be pricier than I could pay. Finding an accountant with French connections would be like looking for an aiguille in a pile of needles. My French wasn’t good enough to talk to one of the high street firms in Lyon. Finding an English speaking French lawyer would be another challenge.

Setting up a business in France is tricky.

It wasn’t the first time I had heard of this problem, though.

A few years earlier, while I waited for a flight to take me back to the UK after my dad had been run over by a tractor (another story, but he and the tractor are both fine), I got talking to a friend living in Lisbon.

He was still working for a UK consultancy firm and he reported the difficulty he was having finding an accountant to set up his payroll.

Why, when we could get everything else on tap and online were professional services like legal, accounting and banking so different?

As a lawyer, I knew there must be great advisers in smaller firms who would have been delighted to help, but I didn’t know anyone I trusted to introduce me to them.

It was all too difficult, and we would have no reassurance that the work would be good at the end of it.

And then there was fintech.

This was at the time that Transferwise (as it was then) was making European banks look like fools.

When I decamped to Lyon I set up one account with Wise and one with a large French bank, who did things the old-fashioned way, charging fees for non-existent service. But they provided a debit card which, at the time, Wise didn’t do.

Needless to say, Wise made things so simple – so intuitively easy – that as soon as their debit card became available… the French bank account got closed.

And that got me thinking: might there also be a way to make legal and accounting services similarly accessible? What would that look like?

So I did what any entrepreneur would do when given avocadoes: I made guacamole. Or at least, I thought about making guacamole.

The original idea behind Adviserly was born, but it would take further frustration to actually do anything about it. 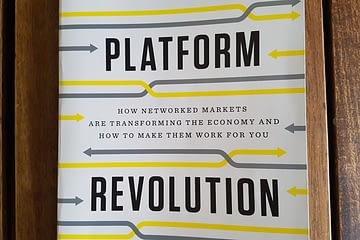 LinkedIn0Tweet0Facebook0 Who is the über for law? The Airbnb of accounting? You can’t move for platforms these days, but the professional platforms are not among them. Earlier this year a friend of mine bought me Read more…

LinkedIn0Tweet0Facebook0 Lawyer 1: “But when I specifically asked last week… you said no?” Lawyer 2: “Yes… but we actually need the client to attend in person to sign this document in front of a notary, Read more…

The Best Books for Entrepreneurs

LinkedIn0Tweet0Facebook0 In the startup world, I’ve found that the best books for entrepreneurs are like treasure maps. “Here there be dragons”, they say, helpfully charting the waters of things to avoid, and routes that might Read more…